So for a while now I’ve been hesitant to share my new project. Basically because I’ve been feeling, well, hesitant about my art. Not a great feeling! 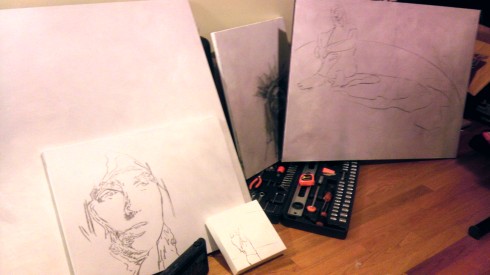 The one on the left has been worked on since this shot was taken, the middle (sort of hidden) has been painted over, and for the one on the right…that’s the second sketch I’ve done on that canvas.

So yeah, a glimpse into my indecisive work process. But I am happy to say that I am finally on track  (more or less) and every piece I want to put into my new show is planned out and in the midst of being ready.

Speaking of which, I have a show coming up! Earlier this year I was honoured to have the curator of the The Fritzi Gallery (at the GCTC) ask if I would be interested in being an artist in an exhibit featuring local illustrators. It will be a 2 artist show. Myself and local illustrator Clare Brebner.

2 thoughts on “Back on track. New project and show!”

Please note: unless specified otherwise, all images on this website are copyrighted to me. Send me a message if you want to use an image somewhere. Thanks!