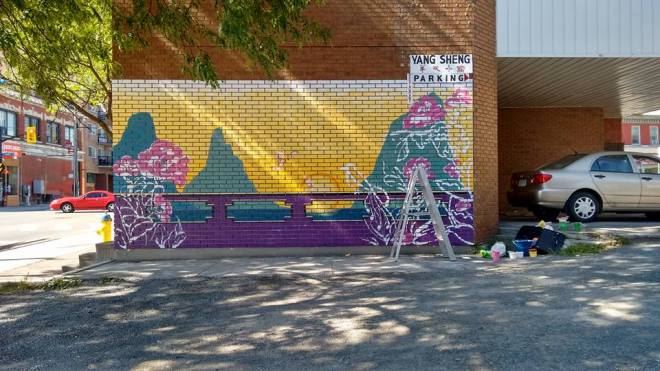 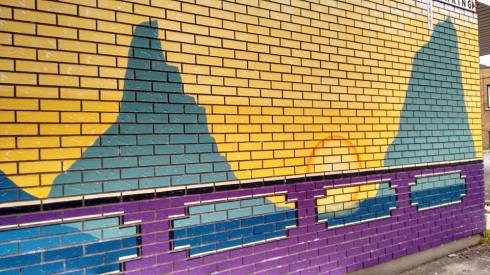 This summer I got commissioned to paint another street mural in Chinatown! (I had previously done 2 other street paintings in Chinatown, here are the links to the posts about those projects! Part 1 and Part 2)

This was my first time painting on brick. That surface just sucks up paint! Here’s how this all happened.

Originally I was asked to paint a different brick wall. One that is frequently vandalized. The idea was that a large cohesive painting would help prevent this. It would have been impressive in terms of scale and visibility. I was so excited to be asked and had put together a design pitch (see below), but… it was rejected by the property owner :(.

I didn’t have to despair too long as it was picked up by the building across the street! The design changed a bit, but was highly influenced by my original. My client wanted it to be a bit more “busy.” It kind of goes against my artistic tendencies, but in the end I am happy with it. Progress photos below:

Click on any image below to open as a slideshow and to see my comments.

working on the background

masking is off…see it it worked!

under painting of flowers, birds, and butterflies

blocking in colours one by one

blocking in colours one by one

Final painting! More elements were added as per client request, but I had to stop at this point.

After the initial time to create the design and collection of supplies, the painting process itself took one week, full time hours. (Then it was back to full time teaching.) It was quite a work out to say the least! Thankfully it only rained a couple times and I got a lot of shouts and comments of encouragement from people passing/driving by. THANK-YOU! If you are ever in Ottawa’s Chinatown, check it out! Bronson and Somerset. 🙂

Please note: unless specified otherwise, all images on this website are copyrighted to me. Send me a message if you want to use an image somewhere. Thanks!